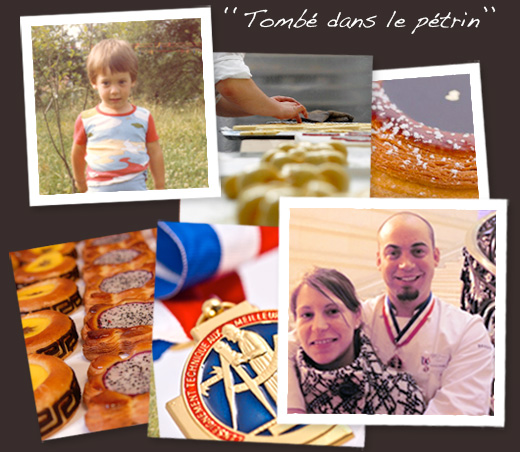 I fell into the dough at the age of 6 when my parents purchased a bakery. At 10, without being asked, I got up at night to spend time with the baker and work the dough.

Not at all motivated by school, I had only one thing in mind: to become a baker. And paradoxically, that’s what drove me to work to pass my Baccalauréat as quickly as possible. My parents backed me up : they agreed to have a son baker, provided he was a graduate-baker.

My “baccalaureat” in hand, my epic could begin. My goal was very clear : I wanted to become the “Meilleur Ouvrier de France” (“Best Craftsman of France”), a prestigious award in France and a contest between professional tradesmen, admired by my family. I started studying at the CFA BFB of Rouen, which is managed by the INBP (The
National Institute of Bakery and Pastry-making), a reference to my parents. This CFA is unique in France because it only accepts students who have A-levels. I started working for my CAP BEP (bakery degrees). For a year I travelled between Rouen and Lyon, where I worked as an apprentice in Philippe Cartellier’s bakery. And from that time, the key moments of my professional life began.

After two years as a baker in Nancy, I came back to the INBP to prepare my BP and BM (highest degrees in bakery). New interlude, I launched and was in charge of my parents’ bakery in Haute-Saône for 2 years. At the same time, I won the French Bakery Cup in the category for Bread. Then I represented France at the European Bakery Cup for two consecutive years and had the title of vice champion team of Europe.

The following year, I went to Quebec to discover the art of baking abroad and stayed 6 months.

A few steps in pastry-making

I came back to the INBP to prepare an accelerated CAP in pastry-making, in order to acquire finesse and broaden my knowledge. I still had the same idea in mind: to take part in the competition for the MOF.

5 years after my A-levels and after accumulating degrees and experience, in my turn I became a trainer at the INBP, providing training anywhere in France and abroad.

All for the competition

At 24, the legal age for registration, I deposed my candidature for the MOF competition. For 2 years I prepared this contest with consistency, dedication, determination and stubbornness. I developed my recipes, multiplied trials and research, especially in viennese baking to balance aesthetics, texture and taste. I developed innovative products to be different.

The results are announced: I became one of the « Meilleurs Ouvriers de France ». Scenes of jubilation, scenes of tears. My wife, my parents, my brothers, my relatives and my friends all shared my success.

After the title, everything remained to be done. At present, I am still travelling as a trainer for the INBP. I train the professionals in France and abroad. My goal is to contribute to the profession, to prove to myself and to others that we can always improve.
My main tasks are the creation of new products in baking. Today, the activity is increasing and includes not only bread but also viennese baking and snacking. I participate in the improvement of professional products and manufacturing processes and give advice in the case of difficulties. Every day is different, all encounters are fulfilling, both from a human point of view and professionally.

Who is Thomas Marie ?

Thomas Marie collects titles and awards. Champion of France and trainer since then, he is awarded the prestigious title of "one of the best worker" in France in 2007. Expert in his field and consultant, he offers training all year long in France and abroad.

The library profession
This is my other passion. Discover my selection...